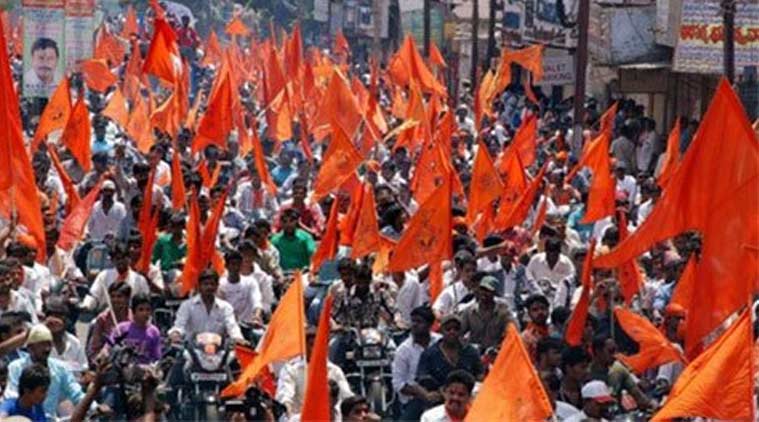 Formation of Bajrang DalVishva Hindu Parishad decided to start Ram-Janaki Rath yatra for awakening the society on October 8, 1984. There was nothing against other religions but certain anti-Hindu and anti-social elements threatened with dire consequences if Vishva Hindu Parishad organized this Yatra. Uttar Pradesh Government, in spite of making sure that those elements could not disrupt our Rath Yatra, refused to give protection to Rath and the participants. The Holy saints made a call to the Youths to protect Rath. Hundreds of Youth gathered in Ayodhya. They performed their duty very well. Thus Bajarang Dal was formed with a temporary and localized objective of awakening youth of U.P., and get their involvement in Ram Janma Bhumi Movement. The results of formation of Bajarang Dal were amazing. Most of the young men were proud in getting themselves attached with Bajarang Dal. In 1986, it was decided to form Bajarang Dal in other states and very soon Bajarang Dal was formed in other states too. The role of Bajarang Dal in Hindu Awakening is not a secret. It successfully got the Hindu Youth involved in Ram Janma Bhumi movement. It is evident from the tremendous success of various programmes, i.e., Shila Poojan, Ram Jyoti Yatra, Kar Seva of 1990 and Kar Seva of 1992.

The Karsewa on 30 October and 02 November 1990 gave an altogether different identity to Bajarang Dal. Such a youth power was associated with it that was absolutely not ready to tolerate any symbols of insult to the Hindu society and which was prepared for any type of sacrifice for the protection of country and Dharma. Bajarang Dal had emerged before the public in the form of such an organisation, especially after 06 December 1992, which was anxiously committed to the creation of a proud, self-respecting and valiant Hindu society. It was already decided that the young generation organised under the banner of Bajarang Dal was in no mood to compromise in any way with the issue of security of the country, Dharma and society. Thats why its motto was Service, Security and Sanskartogether with the maxim of where is rest for me until the cause of Ram is fulfilled. In conformity with the motto and maxim, the slogan ascribed to it wasJayakare Vir Bajarangi, Hara Hara Mahadev.

The following activities carried on under this category :

Apart from the Andolans decided upon by the Centre, this category includes conduction of agitation on any of the following issues/matters (which are only suggestive) and prepare plans for associating the public opinion generated through these agitations and for expansion of the organisation. Apart from these agitations, some of the additional issues can be like this :

(a) Renovation of Religious Places

(e) Opposition to the illegal infiltration.

Under this category, the conduction of the following service projects is expected to be undertaken for creating a positive and constructive attitude among the workers: -The management and development of places of worship, purification of their surroundings and their development, etc. The campaign for collecting grass for the cow-sheds at the opportune time.

Arrangements of water lost and found the department, maintenance of order in the religious congregations, Melas and Yatras. Arrangements of Sanskar Kendras and Free Educational Training in the backward localities, organising Blood-Group Determination Camps and Health Check-up Camps. Looking after helpless patients admitted to hospitals.

A Diksha Samaroh of Bajarang Dal was organised at Ayodya on 13-14 July 1989. After this all over Bharat, many such programs of Trishul Dharan are conducted routinely. In Rajasthan, under the Chief Ministership of Shri Ashok Gahlot, Trishul Dharan programs were banned. A huge agitation was undertaken against this with many Karyakartas getting arrested because of it. Subsequently, after the change of the State government, the ban was finally removed. Trishul is accepted by the Karyakartas as a Dharmic Pratik.

(1) Creation of Ram-Bhakta Balidani (Ready to sacrifice their life) Squad:-

An appeal was made on 26 March 1985 for forming of a Balidani Squad of Ram-Bhaktas for realising the resolve of Hindu society to liberate the Shri Ramjanmbhumi. A resounding reply came from over 5 lakhs Ram-Bhakta youths for the enrollment of their names on these Squads.

Bajarang Dal appealed to observe a state-wide Bandh in protest against the misdemeanor of the Central and the State Govt.; and their conspiracy to suppress Shriram Janmbhumi Andolan. The Bandh was an unprecedented success. Not even the Pan-Beedi shops were to be seen opened anywhere in the whole of Uttar Pradesh.

(3) Opposition to the Announcement of Mini and Long March:-

Whereas the Muslims, on one hand, ignited the riots in Uttar Pradesh on opening the lock of Shriram Janmabhumi in Ayodhya; and on the other, they announced that they would reach the spot of Shriram Janmabhumi for praying Namaz by undertaking ‘Mini’ march and ‘Long’ march. Their challenge was accepted and successful protests were made. And, the fundamentalist Muslims had to abandon both the ‘mini’ and the ‘long’ march.

(4) Agitation for the Release of Shriram-Janaki Rathas:-

Uttar Pradesh Govt. had forestalled three Rathas at Ayodhya and one Rath at Rajapur (Banda), as there were riots in Uttar Pradesh on opening the lock of Shriram Janmabhumi during the course of Shri Ram-Janaki Rath Yatras. Later on, they released the Rathas at Ayodhya but not the one at Rajapur. The Govt had to back off owing to the declaration of widespread protests by the Bajarang Dal and voluntarily took the Rath to the VHP office in Lucknow after releasing it.

It was decided to re-start the Karsewa at the beginning of 1990. The then Prime-minister Shri V. P. Sing requested for a four months time from 08 February with an assurance of solution to the problem, which was given. The Bajarang Dal decided to keep the Govt on its toes during these four months. On completion of every month, bells and cymbals were sounded in front of every District Magistrate’s Office in the state as a reminder. The final “Chetawani Diwas” was observed on 08 June 1990. The agitated Socialists and Communists attacked the program at Kanpur, but they had to beat a hasty retreat soon thereafter.

A “Chetawani Diwas” was observed on 15 August 1990 to warn against playing with the sentiments of Hindus. An attempt was made to convey the sentiments of the entire society to the Central Govt by sounding of bells, conches, cymbals, etc. at a particular time on the same day all over the country.

It was decided to hold a convention of Bajarang Dal workers in Ayodhya in memory of the Karsewaks Martyred during the Karsewa on 30 October and 02 November 1990. Accordingly, about 12,000 representatives hailing from all provinces in the country stayed in Karsewakpuram of Ayodhya on 30 October to 02 November 1991. Senior office-bearers of the VHP gave them guidance on various topics. They all solemnly resolved to liberate Shriram Janmabhumi.

Shankaracharya Swami Vasudevananda Saraswati in his inaugural speech said that the Dharma is embodied in the form of cow and protection of Dharma is not possible without protecting the cow and its progeny. Shriram Mandir cannot be constructed until and unless the cow slaughter is stopped. Because both these points are linked with the protection of Hinduism.

The Akhil Bharatiya Sewa Pramukh of the RSS and the guide of the VHP Ma Suryanarayan Rao demanded a total ban on cow slaughter. The parliamentarian from Faizabad Shri Vinay Katiyar called the problem of infiltration as the greatest headache for the country.

Shri Jayabhan Singh Pavayya averred that thousands of people had been coming to the Magh Mela, but they use to come for salvation by taking a dip in the holy waters and washing off their sins; whereas all of you have come here to take an oath for the protection of Dharma.

Looking at the sea of people in front of him, Acharya Dharmendraji said that it was an unprecedented historical phenomenon. It was for the first time such a sight is before all of us to see after 6 December. He gave a pledge for the protection of cow amid the uproarious sloganeering with the raised fists of all the Bajarang Dal workers, office-bearers of the VHP and the Saints in that national Sammelan that they would fulfill that pledge even by sacrificing their lives if need be. The Akhil Bharatiya convener of the Cow-Raksha Year programs Dr. Premchand Jain while shedding light on the importance of cow in Hindu society, presented the sketch work of the movement. He said that the cows being taken to the slaughterhouses would be stopped under the scheme of this movement.

Shri Surendra Jain read out all the six resolutions one after the other and the massive congregation passed them in the uproarious Omkar sound in the Sammelan.

Shri Shrishchandra Dixit presented a brief sketch of all the laws of the lands that would be required to be followed while working in the Gau-Raksha Andolan.