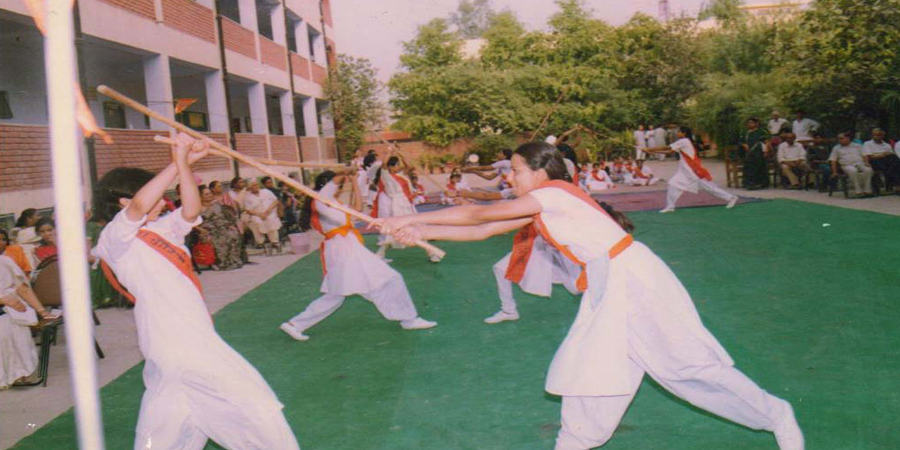 Bajarang Dal had gained the approbation throughout the country on account of eligibility, sincerity and hard work, as regards various dimensions of Shriram Janmabhumi Mukti Andolan. As a result of its dynamic contribution, the neo-youths from all over the country got attracted towards the VHP. The youths in thousands have joined the Bajarang Dal in different parts of the country. Similarly, the girls also were attracted towards the VHP. With a view to kindling a sense of security, Sanskar and dynamism as also to solve various problems pertaining to them, the VHP founded an independent organisation of Hindu Yuwatis in the name of Durga Vahini on Ashwin Shukla Ashtami (Durga-Ashtami) of Samwat 2041 (1984-84). The sisters between 15 to 35 years can join Durga Vahini. Durga Vahini is an unequalled organisation of Hindu Yuwatis, which is committed to the protection of Rashtra-Dharma and Sanskriti through bringing about a renaissance in the Hindu society with Service, Security and Sanskars as its motto.

Durga Vahini is not lagging behind the Bajarang Dal in any way in accomplishing all the action-plans of Shriram Janmabhumi Mukti Andolan most effectively and with equal strength. They had participated in Karsewa and Satyagraha etc. in big numbers. They had undauntedly faced all the obstacles in the path of reaching Ayodhya for Karsewa like their male counterparts. The blood-stained scenario in Ayodhya on that day rather forced them to forsake their normal female tenderness and affinity; and assume a most splendorous form by creating a living,s sturdy women’s wall around to protect their brothers who were being assaulted by the security forces with lathis and bullets. They were not deterred even after they were arrested by the police and deserted in a sort of forlorn, far away places. They walked the long-off distances on foot. Shriram Janmabhumi Andolan kindled a new unprecedented dynamism among the Hindu Yuwatis. It is expected from the Durgas of Durga Vahini that they extend their co-operation in providing a solid support to the Hindu Society and culture by ending all types insecurity, unrighteousness, immorality and inequality among Hindus and to launch our nation on to the path of progress; to create a Dharmic atmosphere and to re-establish Dharma by destroying all the wicked and crooked people like Durga Devi did in the ancient times. Looking to the utility and importance of Durga Vahini, an All Bharat status was conferred upon it through a declaration in an Akhil Bharat Mahila Sammelan held on 07 May 1994 at Delhi and Pujya Sadhvi Ritambhara vas made its Akhil Bharat Samyojika and Smt. Dr Nirmala Purohit as its Sah-Samyojika.

Durga Vahini is a dynamic voluntary organisation of Hindu Yuwatis. The centre of strength or energy of any nation is its youth force. Because, it is this youth power alone that takes the society and nation to the acme of glory, even at the cost of their lives. That’s the reason why all the societies and institutions always strive to enlist the involvement of youth power with them. The non-idle, dynamic youth power itself is the backbone of any nation. The Vedas have therefore given the message of Charaiveti, Charaiveti (Be on the move, Be dynamic). Dynamism is life and non-dynamism is death. The Durgas of Durga Vahini had to ceaselessly work for the nation. They will have to adopt different programmes to create various virtues like awakening, unity, valour etc. among them. It is but natural that these Durgas should be sturdy and quite competent both physically and mentally. The image of Durga Vahini should be of an organisation that strives for the security of society and imparts Sanskars. Hence the following points were taken into account while bestowing an All Bharat status upon Durga Vahini.